Manal Ahmad tells the story of one Bundo Begum from “Hindustani” Delhi, who was destined to grow old in “Pakistani” Lahore. But for Ahmad, Bundo Begum is simply the “Bua” she always knew as a child. 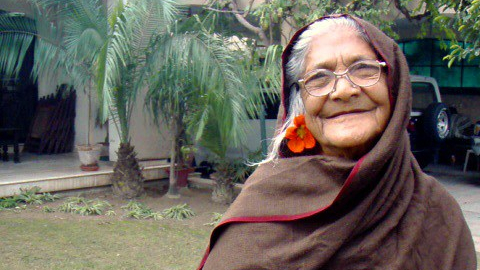 There was a time when she possessed all of her teeth, though when that time was, nobody really remembers. In any case, toothlessness suits her, in a wise, gnomish kind of way. She maintains an insatiable appetite for mutton roast in spite of it, consummated on Eid, the annual Muslim feast day, when the kitchen floods with the smell of freshly cooked goat and she blissfully masticates each sacred morsel with bovine patience. Occasionally she just swallows, in great noisy gulps – but indigestion is unknown to that crumpled brown stomach, fortified by a century of nibbling green chilies.

That is just one of her legendary talents; above all, Bua possesses the talent to survive. If at the age of sixty, she could suffer nine consecutive tooth extractions with no anesthesia or sterilized instruments or latex-gloved dentists and live to tell the tale, she could survive anything – even seven bloodthirsty train-marauding Sikh mobs in 1947.

It was the year Pakistan came into being. She had all thirty-two of her teeth then, perfect pearly white squares brushed violently with a tree twig every morning, and white jasmine-buds in her eighteen-year old ears. There happened to be an Englishman, a gora sahib aboard their Lahore-bound train, so the mobs, out of a reluctant fear of their erstwhile masters, spared the Muslim refugees a massacre.  Evidently young Bundo Begum, Earring Lady, from “Hindustani” Delhi, was destined to grow ancient in “Pakistani” Lahore.

Still, there are other ways to die, especially during the largest refugee migration in history. Typhoid claimed the lives of two of her children, whom she and her husband buried in unmarked graves at unnamed railway stations in the severed Punjab. They were so young Bua doesn’t even remember their names; perhaps they didn’t have any. By the time she made it to Lahore she was an aged woman. Years later, she would recall that night before the escape with tears in her eyes, when, secretly encamped in Delhi’s Red Fort, she had desperately strained muddy rainwater with her muslin scarf and ladled it down her babies’ throats, to save them from dehydration.

But she couldn’t save them; independence entailed sacrifice. It entailed new children, when the old ones had gone to Heaven; new family and friends, when the only ones she ever knew were left behind an insurmountable wall of visa regulations, mistrust and communal blood called the India-Pakistan border.

It also required a new husband, when the one old one perished of undiagnosed Tuberculosis, even if the new husband’s sole occupation was cooking vegetable stew, apple dumplings and fish and chips in the colonizer’s kitchen. When the English families who remained in Pakistan after 1947 relocated to Islamabad, the brand-new clean-green capital city at the foot of the Himalayas, Bua’s new family went in tow. Their English employers paid well; not least of all, they were gora sahibs, white masters, which made Bua’s husband’s position the most coveted in the domestic servant market. No doubt he gloated over this little verity, as he dressed for work every morning in his full-sleeved dress shirt and crisp white apron, with a “How do you do?” flashed on his lips.

But then the English went back across the ocean to where they came from – presumably tired of the heat and the bloody inconvenient wars – and that’s somewhere Bua’s family could not follow. Her husband thus abandoned by his erstwhile masters – were his crumpets not buttery enough? –  Bua took her own hands to the sink, scrubbing other people’s dishes to earn two meals a day for her family, though not quite enough to put a roof over their heads.

It happened by worth of mouth, as do most things in the subcontinent. One woman wanted laughter and the patter of young feet to ring through the empty servants’ quarters at the back of her sprawling, wooded, 2-acre Islamabad home. The other needed a room to sleep in with her unemployed husband and four children. Hence, the fates of two disparate women were joined in a bond that was to transcend generations, so that three decades years later Bua’s daughter would relate this very story to Razia Khan’s granddaughter Manal as they sat eating oranges by the gas heater in Razia’s daughter’s living room on a cold December night.

Razia Khan never had to scrub dishes. It may be because her husband was a senior officer in the Pakistan Railways, the most prestigious civil service in the country – or perhaps it was because both happened to belong to pre-Partition nobility, that genteel cadre of Betel leaf-chewing, poetry-penning, Urdu-speaking Pashtuns who might have lost their estates to the British but still prided themselves on having the fairest skin, greenest eyes and proudest hearts in the whole of the Raj. Bua lived in their quarters and occasionally worked in their kitchen, but she was never a tenant or a servant in Razia Khan’s eyes – her Urdu was too fine and her cooking too faultlessly North Indian to be either. Besides, Bua was a mohajir, a migrant to Pakistan, like Razia Khan herself; nothing more needed to be said.

So while they ate at separate tables and sat on separate chairs and addressed each other as befitted their social rank, there was never any drama between them; never any bitterness, any envy, any doubt; none of the awkward resignations and messy dismissals common with domestic servants in any well-to-do Pakistani household. As long as Bua got the bagfuls of free clothes and shoes after ever spring cleaning, basketfuls of fruits and vegetables from the garden, and the affection and respect of Razia and her children, she was happy. And as long as Razia got the company and loyalty, the superb chicken pulao and that deft pair of hands to massage her head with mustard oil every Friday, she was happy.

When Razia Khan’s husband was transferred back to Lahore, Bua and her family moved with them. She never moved again. Her children grew up, got married and settled elsewhere, her classically colonial chef-husband died of a heart attack, and even the irrepressible Razia Khan succumbed to a fatal cancer. But sixty-one years after that final flight from Delhi, Bua is still in here, older than the country she has learnt to call her home but not her land.

She still wears jasmine flowers in her ears, plucked every dewy morning from the garden and inserted through gaping ear-holes like swift knitting needles. She still makes vegetable ishtoo and apple dumplings in memory of her husband, her foxhound nose taking over where her myopic eyes fail. But when she asks someone to please play the VHS of her favorite old Hindi movie, the sun suddenly breaks through from behind those clouded, bespectacled eyes and the faces of Rakhee and Amitabh Bacchan appear realer to her than those of her own grandchildren.

Her India lives in the television. She went back once, the only time since Partition, to her birthplace near Delhi where her family still lived – brothers, sisters, aunts, uncles, cousins she had not seen in over twenty years. But something very dreadful had happened to them: something called poverty, and the contempt of a country that despised them because of the God they worshipped. She shuddered at the filth, the absolute starkness, the hunger in their eyes that seemed almost maniacal to her – and she fled in horror, never to return, leaving them to fight over the lees of the land where her Muslim ancestors once built the Taj Mahal, and her family built hovels.

Time has changed Bua too, but not very much. Her hair is silver now, which she claims, smug with traditional feminine piety, to have never subjected to the profanity of a pair of scissors – and a freshly-bathed Bua, sitting on a charpoy in the back verandah in the sweet ten o’ clock sun slowly running a lice-comb through her waist-long tresses, looks like a princess grown old in enchantment.

Bua is well-acquainted with princesses – the annals of her superlative storytelling memory are full of them. When she tells a story, in her reedy, meandering voice, animals start to talk, princesses marry peacocks, kings dine on their sons and monkeys wrestle ogres and win. She is hypnotic that way, like a witch, lulling the ears of her avid listeners with her witch-wisdom.

Sometimes she can be found burning clutches of red chilies over the stove, her unwritten antidote for every mysterious and non-mysterious illness. Even while the whole house reeks of smoke, she stands in the sulfurous kitchen and declares, with her enormous unblinking owl’s eyes, that by Providence, she smells nothing. And the exorcism is repeated every day until the unlucky evil spirit that has happened to alight upon somebody in the household makes well its escape and Bua can confidently confirm that the chilies smell like chilies. But, as this never happens, the evil spirit perpetually remains in the house, and Bua is assured that she still has some use in the world.

For a self-appointed traditional healer, she has an absolute mania for multicolored tablets and viscous ointments of the allopathic variety, convinced that an Aspirin can cure her of death. Once she was invaded by a host of invisible parasites that settled permanently in the faults and creases of her skin, and she could hear their tiny malicious voices whispering conspiracies in the dark to kill her if she didn’t scrub her withering body with a shard of brick every morning. When the voices became unbearable, she frantically resorted to dousing herself in sun block lotion squeezed from innumerable little bottles in her collection of free medical samples. When the last drop of lotion had been squeezed out, she knew she was dying.

But she wasn’t dying – half-blind silver-haired storytellers who wear jasmine in their ears and snack on green chilies don’t die of phantasmal rashes. She was just growing ancient in Lahore instead of getting killed by a Sikh mob in 1947.