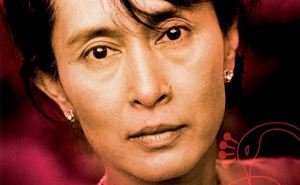 I woke up this morning and the first news that greeted my eyes when I opened my computer actually made me shout out with happiness – Burma’s pro-democracy leader and Nobel Peace Prize Laureate, the beautiful and heroic Aung San Suu Kyi  has been released from house arrest! After almost 15 years of incarceration in abject conditions at her home in Rangoon by the unspeakably brutal military dictatorship that has ruled over Burma since 1962, this is indeed a joyous event, even as it comes in the wake of a sham election.

I feel a personal involvement in the story, not only because of a phenomenal book called the Glass Palace which left a lasting impression on me when I read it 10 years ago, but because of an amazing individual I got to know and work with during my time at Berkeley. Min Zin is a former political activist from Rangoon who was forced into exile by the Burmese junta in 1989, at the age of 16. He now lives in California and is pursuing a PhD. in Asian Studies at UC Berkeley. I wrote a detailed profile about him and his life in exile, which you can read here.

The military junta in Burma has always been extremely erratic, and nobody knows how long Aung San Suu Kyi will remain free or the extent of her freedom. But I hope that this augurs a new and happier chapter for this rich country, poised at the fascinating crossroads between India and East Asia, and home to some of the most spectacular Buddhist temples in the world, such as the Golden Rock Pagoda. I hope I can visit some day.